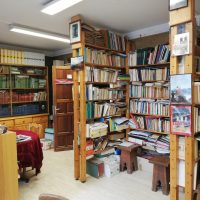 “Ora et Labora”
said the antique maxim of the Benedictine monks. This Scouting Laboratory managed by the monks of Riaumont testifiis a living tradition which is not satisfied to live on the vestiges of the past, but intends to pursue under the conditions of our times this ideal which incarné the founding fathers of the SDF: ” to think in a scout way “. Considering their roots, they approach without hang-ups the third millenium,
needing to join in with these ” evolutions ” which do not miss a “R “.
The Laboratory scout accomodates everyone in the spirit of a true scout fraternity.
The availability relates to in particular files, reviews, works, collections, rare bits, photographs, soundtracks, cinematographic, videographic joined together since the creation of the Village of Riaumont.
One will note thus that this laboratory has a significant specialized library including / understanding more than 3.000 scouts works in French including 650 novels (collections ” Signs of Track “, ” Jamborée “, Campfires “, etc.) and nearly 10.000 reviews of branches connected per complete years. The totality of the ” Books Ste Jehanne ” and works of Father Doncoeur.
The majority of the reviews concerning the SDE, SUF, SSt.G, SGCF, etc…
Many illustrations and original drawings of the illustrator Pierre Joubert are also preserved as well as funds relating to personalities of french scouting like Paul Coze, Mgr. Jean Rupp.
A scout museum preserves an astonishing and varied parts energy of the scarf of the ” Rover Scout of legend ” or shirt constellated with badges of Paul Coze, in modest books of functioning of patrols, while passing by tents, bags, uniforms or staffs of all countries…..
This unit perhaps placed at the disposal, on the spot, to study the history and the life of scouting in various fields and in particular the scientific, artistic or cultural incidences. Average data processing and of photocopy are available to facilitate the work of the researchers who thanks to a hotel trade can place on the spot.

The Laboratory scout of Riaumont makes it possible to bring help to the “Patrol of Search and Studies University ”
(PREU) and in particular to the students carrying out a report of contemporary history, but it is also a platform of meeting exceeding only university search to connect :
researchers.
collectors.
current experts of the scout method.

The Scouting Laboratory of Riaumont did not develop

yet (2001) a significant production, but assistance especially voluntarily with multiple work. It already, however, published since 1991 a list of the very many university work completed since fifty years
concerning scouting and assistance to its update each year. It has, for example, made the statement of all the articles interesting scouting published in the review ” Studies ” or collaborated in the drafting of a lexicon of the various abbreviations and terms of use at the scouts, and the french encyclopedie “Mémoire du Scoutisme”.
It works on a general armorial of SDF movement and carries out search on the list of
SDF troops of Paris and suburbs.. It is in particular a question of bringing closer to the date of foundation, the identification number, the name of the corresponding parish with the notification of the remarkable personalities which passed there as well as the possible changes occurred (with the troops raiders).
The Laboratory scout of Riaumont ensures finally the follow-up of a very abundant correspondence with about thirty students or professors (see PREU below) as well as answers to various questions.

Preu whose seat is at the Village of Riaumont functions in symbiosis with the Scouting Laboratory. It is currently a friendly and abstract group of students and researchers working in the same spirit
on scouting.
It has access to the documents and rich collections of the Scouting Laboratory and can also ensure the comparison with other researchers or other associations likely to give information.
Thus, already more than one about fifteen university work came there to draw with the source of Riaumont in the most various fields such as for example : musicology, medicine, theology, artistic activities and cultural.
The data base computerized of old units S.D.F. of lle of France grew rich. More than 600 groups and 150 clans are indexed there with patronyms, date creation, n° of Group, parochial establishment, etc… A new tool of search, with the provision of those which would like to launch out in the study of the
S.D.F. in Paris area of 1920 to 1964, always virgin hunting ground.

In addition, a scout of Riaumont has just put the first hand at a ” Benedictines” task: ” Explorat “. It is about another data base indexing the French reviews scouts of all associations, by indexing their contents progressively. Thus one will be able to find, thanks to this data-processing tool, all kinds of articles, indexed by topics, authors and key words. A convenient means to locate itself in the mass of articles produced annually by associations.