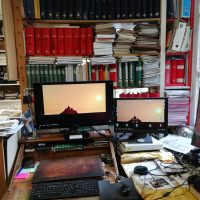 It works on a general armorial of SDF movement and carries out search on the list of SDF troops of Paris and suburbs.. It is inparticular a question of bringing closer to the date of foundation, the identification number, the name of the corresponding parish with the notification of the remarkable personalities which passed there aswell as the possible changes occurred (with the troops raiders) . The Scouting Laboratory of Riaumont ensures finally the follow-up of a abundant correspondence, with about forty students or professors as well as answers to variousquestions. Preu whose seat is at the Village of Riaumont functions in symbiosis with the Scouting Laboratory. It is currently a friendly and abstract group of students and researchers working in the same spiriton scouting. It has access to the documents and rich collections of the Scouting Laboratory and can also ensure the comparison with other researchers or other associations likely to give information. Thus, already more than one about fifteen university work came there to draw with the source of Riaumont in the most various fields such as for example : musicology, medicine, theology, artistic activities and cultural.. The data base computerized of old units S. D. F. of lle ofFrance grew rich. More than 600 groups and 150 clans are indexed there with patronyms, date creation, n° of Group, parochial establishment, etc… À new tool of search, with the provision of those which would like to launch out in the study of theS. D. F. in Paris area of 1920 to 1964, always virgin hunting ground. Le Labo scout peut mettre aussi à votre disposition les archives personnelles de Paul Coze, des journaux des toutes premières troupes parisiennes (Entraîneurs catholiques, Vaillants Compagnons de saint Michel, “4, 7, 8″) . Avis aux chercheurs !In addition, a scout of Riaumont has just put thefirst hand at a new ” Benedictines” task : ” Explorat “. It is about another data base indexing the French reviews scouts of all associations, by indexing their contents progressively. Thus one will be able to find, thanks to this data-processing tool, all kinds of articles, indexed by topics, authors and key words. À convenient means to locate itself in the mass of articles produced annually by associations.